On November 22, 2022, as part of U of T’s Adam Sustainability Celebration, the Credit Valley Conservation (CVC), an organization focused on protecting and restoring the environment, presented a story map that highlighted what climate data tells us about ecosystem health in the Credit River Watershed.

Yvette Roy, Senior Specialist of the Landscape Science Division at the CVC, commenced the presentation of the story map by reporting that “average annual temperatures have increased by 1.8 degrees Celsius.” While these increases are consistent with warming trends identified in Canada, they are double the rate of global trends. The warming trend in the watershed started in the 1980s. Roy noted that all seasons have seen increased temperatures, but winter has warmed the quickest—the average minimum temperature has increased by 2.5 degrees Celsius.

Additionally, Roy highlighted the alarming rise in precipitation levels in the Credit River Watershed, declaring that “annual precipitation has increased by six per cent in Toronto Station and by 23 percent in Orangeville [an Ontario town northwest of Toronto].” Additionally, the story map reported that 13 per cent more precipitation during the winter season is falling as rain instead of snow.

Roy then explained the negative impacts of these climate trends on ecosystems. She put forth that the average daily maximum stream temperature has increased by 5 degrees and stream flows have increased by 67 per cent. These increasing temperatures are a concern for sensitive cold water fish in the Credit River Watershed, as these rises are expected to exceed the lethal tolerance of certain species, such as the brook trout.

Roy also explains that lower amounts of snow accumulation, an ongoing issue, will become problematic—spring snow plays an integral role in fleshing out the nutrients from the streams and removing sediments.

Roy contended that while climate change has not caused an upsurge of invasive species, it can exacerbate such species’ effects on ecosystems. The lack of cold winters is beneficial to pests, which usually die when winter temperatures dip below negative 25 degrees Celsius.

To adapt natural ecosystems to climate change, the CVC is actively engaging in the restoration of plants, streams, and forests. The CVC has also offered assistance to neighbourhoods vulnerable to extreme heat through the Peel Climate Change Partnership.

During the panel discussion, Dianne Zimmerman, Environment Manager of the City of Mississauga, elaborated on the urgency to reduce greenhouse gas emissions in the city to avoid the worst of global warming. She stated that “time is of the essence,” and discussed “how we budget for and pay for the absolute transformational requirements that we need from both the transportation perspective as well as buildings.”

Zimmerman believes that in the City of Mississauga, “there is a huge opportunity as residents to take action.” She postulated that residents of Mississauga possess a lot of decision-making power regarding their modes of transportation. Utilizing transit, cycling, walking, or purchasing an electric vehicle can make a difference. She encouraged households in the city to become more energy efficient and reduce dependence on natural gas.

Tenley Conway—a professor from the University of Toronto Mississauga’s Department of Geography, Geomatics and Environment—delved into the most sizable environmental opportunities in urban Mississauga. More extensive research in climate change, with involvement from all academic disciplines, is paramount. She discussed nature-based solutions, which refer to the use of nature in helping society adapt and mitigate the effects of climate change.

Examples of nature-based solutions include trees, raingardens, and bio soils. Professor Conway revealed that these are “spatially disaggregated [solutions].” For example, trees need to be planted throughout the city, by both private and public landowners, to reap the benefits of their cooling effects and their ability to help manage stormwater.

In addition, Professor Conway emphasized that “there is a lot of research opportunity, and [we] need to try to understand how we switch from what is primarily a centralized system to be a decentralized or disaggregated [system],” referencing how nature-based solutions must be implemented.

Divya Arora—Community Engagement Organizer, Sustainable Communities at the David Suzuki Foundation—believed that the student population is increasingly prioritizing climate action, perhaps more so than other groups. She asserts, “It is a problem that we [young people] have not created but we have to solve.”

According to Arora, broader change, such as policy reforms, can only commence when people act collectively. She explained that “climate change is a societal problem,” and highlighted the importance of raising awareness about these climate issues through social media. The actions of every individual are important and are part of the bigger picture in mitigating the effects of global warming.

Both the presentation and panel discussion ultimately emphasize that tackling the issue of climate change is a shared responsibility and requires a collective effort. 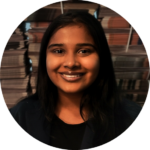