I stand in front of my bedroom mirror some mornings and perform a complex series of assessments and considerations about my appearance that day. No, it’s not because I’m vanity-driven, or I have chosen to emulate Narcissus. The truth is I am a woman, a woman who is plus-sized, a woman who wears the hijab, and a woman who adheres to the rules of modesty.

Now don’t get me wrong, I choose to wear the hijab and modest clothing because that is how I’ve chosen to practice an aspect of my faith. But there are countless societal rules and limitations that govern each facet of my identity, separate from my religion. Women “shouldn’t” wear really short skirts or revealing clothing, plus-size people “shouldn’t” wear certain styles, and so on. Thus, by extension, a plus-size hijabi woman, such as myself, has several layers of societal norms and attitudes to wade through even after fulfilling the most basic modesty rules, such as covering my hair and clothing my body, save for my hands and feet.

Muslim women as a whole face an increased level of scrutiny regarding what they wear, from the government trying to control our hijabs to your run-of-the-mill auntie or uncle who, covertly or overtly, shames you for an outfit choice. Strangers or acquaintances even feel entitled to comment on a Muslim woman’s appearance by trying to dictate what they believe is the “right” way to wear hijab, shame women who have chosen not to wear one, or argue that they put on too much makeup. The list is endless. The list is exhausting. The list continues on the back if you are plus-size.

Plus-size hijabi women face a more nuanced list of expectations and hurdles when it comes to dressing modestly. You see, it is not enough to simply wrap a body in clothing to achieve modesty. The expectation around modesty requires the person’s figure to be obscured. Thus, the bigger the figure, the harder it is to “cover” and obscure it. Essentially, a skinny hijabi can wear a hoodie and jeans and still achieve the ideal of modesty. In contrast, a curvier or plus-sized hijabi could wear the same clothes and be deemed immodest.

So, what’s a curvy gal supposed to do? Well, one might suggest turning to clothing designed intentionally to be modest. After all, there has been a recent boom in the modest fashion industry, with many brands claiming to be inclusive and diverse. And while this new market has definitely helped normalize and highlight modest fashion, the options for plus-sized women tend to be as little and bitter as a cup of Turkish coffee. The main issues lie with a lack of appropriate sizing and flattering styles for bigger bodies. For some ungodly reason, modest fashion designers tend to design plus-size modest clothes with a bedsheet as their inspiration: big, flowy, loose on some ends while tight on others, and just plain “meh.” Meaning that if you want to be “modest” you’re going to have to give up style and personality to buy these clothes.

The hyper-sexualization of plus-sized bodies, which works in tandem with the condemnation of being judged as “too fat” along with the policing of women’s appearance, and the exclusion of plus-size fashion, all add up to an existence spent in what American historian W.E.B Du Bois calls a double consciousness—the experience of looking at yourself with the judgements and norms that society will look at you with.

And that is why, dear reader, I spend mornings searching the hills and valleys of my body, calculating if the clothes I’m wearing cover their proper borders, or if I’ve left some places exposed—vulnerable to the attacks of society. I hope one day my body will cease being the political battleground it has always been. However, until that mythical day, I wish to let my fellow plus-sized and curvy hijabis know that your struggles are seen, and that whatever your body shape and size, you are deserving of choice, respect, and celebration. 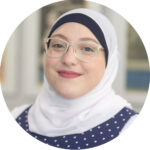 Columnist (Volume 48) — Aya likes to watch the world burn. In other words, she's a Political Science and Sociology double major in her fourth year. She writes the Ear To The Ground column this year, where she basically talks about UTM’s happenings and student life. She's worked at The Medium for three years now, starting off as a staff writer, levelling up to be Opinion Editor last year, and now she gets to be her quirky self through the column!