The comedy film Bros, directed by Nicholas Stoller, recently premiered at the 2022 Toronto International Film Festival. According to The Queer Review, the movie made “history as the first major studio feature to star and be co-written by an openly gay man, Billy Eichner.”

In this film, Bobby (Billy Eichner) is a cynical but smart gay man who is emotionally unavailable for any romantic relationships. However, when he encounters the muscular lawyer Aaron (Luke Macfarlane), his life changes—even though Aaron does not believe in relationships either. Their differences teach the couple how to tackle crucial problems in their relationship.

Through conversations about their different upbringings, Bobby and Aaron form a bond. While Bobby grew up in an open-minded family that allowed him to explore and develop his sexuality at a young age, Aaron grew up in a less progressive family from a small town in Upstate New York. He did not get to accept his true self and was, for a long time, trapped—pretending that he was something he wasn’t. While Aaron made his living as a testament lawyer, he was once really interested in designing chocolate packages.

As their relationship prospers, Aaron becomes fascinated by Bobby’s genuine confidence. There is a scene in the film when Aaron asks Bobby what makes him so confident. Bobby explains that even though he had supportive family and friends growing up, he was also told to be less of himself so that he could be more successful in mainstream society. “Confidence is just knowing you are the only person left you can count on,” says Bobby to Aaron.

The film depicts the struggles of queer people through the repressive nature of modern society. Public institutions like schools and workplaces keep restricting the queer community from being who they truly are. “I went to college, and my musical theater teacher told me that I had a ‘gay walk’ and a ‘flamboyant quality’ which would ‘limit my options,’” says Bobby.

Through the movie’s unique use of humor, Stoller captivates audiences and explores queer issues in dynamic ways. Films like Bros are crucial to today’s cinema because they tell stories that represent queer perspectives. In this way, the film speaks up for the queer community and notes that there are ongoing societal changes that require drastic improvements. “The world caught up with us, but didn’t catch up fast enough,” says Bobby. 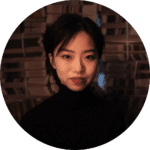 Staff Writer (Volume 49) — Zitong Chen is currently a third-year student at UTM, majoring in Professional Writing & Communication, and minoring in Creative Writing and English Literature. Zitong finds that writing is a way of storytelling—a way to reflect on and extend the meaning of life. Aiming to bring some insights and creativities to The Medium, Zitong hopes to become a mature writer through this journey. During her spare time, Zitong spends a lot of time in cafés, or watching movies.