Ah, graduation. A time when students finally throw their mortarboard caps in the air, hug and pat each other on the back, and take pictures with their family and friends. Except, for the last two years, Covid-19 forced graduating students to stay inside and glance at their names as they dragged across the screen like the credits of a movie. But not for the Class of ’22.

As Covid-19 restrictions fade, this year’s convocation is planned to be in-person. So, The Medium caught up with three graduating students to reflect on their time at UTM, their experiences of online and in-person deliveries, and what they hope the future will bring them.

Dalainey Gervais spent the last five years studying her passion—linguistics. Even though her career goals changed a few times over the years, her love for language never faded. “I was sure I would stay in the realm of academia, focusing on phonetic research in African languages,” she shares. Eventually, through her involvement with clubs on campus, Gervais got introduced to writing fiction and creative non-fiction. “My involvement with these groups pushed my career path toward something more writing-based.”

After building close friendships virtually, Gervais’s most memorable time at UTM was when she met her friends in-person for the first time. “Working alongside the amazing team at The Medium and the UTM Sexual Education Centre has also been very exciting,” she adds. “I was able to work with incredibly talented and kind-hearted peers.”

As a student who experienced online and in-person courses, Gervais says she grew fond of both delivery methods. When classes were in-person, she built strong connections and participated in team-building events through clubs on campus. However, this became much easier online. “Although I was not able to make in-person connections, I was able to participate in more clubs and work alongside a full course load,” she states.

Though online classes helped her become more engaged on campus, Gervais notes she still went through some rough periods. “I felt like I was having an identity crisis,” she says. “Like I was losing myself, my friends, and my relationships through working exclusively online.” Although challenging, this helped Gervais reflect on who she is and who she hopes to be someday.

Upon graduation, Gervais will be starting the next chapter of her life in Ottawa, pursuing her interests in professional writing at Algonquin College. She also wants to continue contributing to The Medium, as she has found her time at the newspaper incredibly formative.

“My biggest point of advice would be to not stress,” she concludes. “When I first started, I looked too far into the future and would get down on myself when I didn’t feel like I was moving toward my goals fast enough. Focus on the moment and set attainable goals to help yourself grow.”

Louis Lam still remembers the first time he saw snow at UTM. It was in his first year when he lived on campus at the MaGrath Valley residence. The night prior, he hosted a Halloween party with his friends at their small townhouse. He remembers waking up the next morning feeling tired and hungry. “I went to get pizza from Davis, and I remember everything was so bright,” he recalls. “The roads and townhouses were covered in this really thin layer of snow. I started yelling and laughing in awe.”

As the day went on, more snow piled up, and that night, all of MaGrath Valley residents had a snowball fight. “We made a huge snowman in the middle as well,” says Lam. For him, having a group of supportive friends has helped him overcome the challenges he faced in university.

When he first started his undergraduate studies, Lam was interested in the field of clinical psychology. As the years went on, he learned about the challenges of getting into graduate school. According to him, competition is intense, and space is limited. “It’s hard to find things to fill up my resumé to stand a chance against others with stacked profiles and perfect academic records,” he shares. “It’s not a field where you can just quit halfway.”

As a result, he deviated from becoming a clinical psychologist and now wants to pursue writing. After graduating, he plans on taking a lot of copywriting internships to gain experience and eventually land a position. “I [also] have plans to travel around Canada for a bit, specifically to the West towards Alberta and Vancouver,” he adds.

Reflecting on online lectures, Lam states the sudden transition was difficult at first. He wasn’t able to focus, and he would often wander off to surf the internet or play video games. “The fact that I could turn off my camera also meant I didn’t have to hide what I was doing or act like I was paying attention,” he continues. “Having recorded sessions was nice, but it also gave me an excuse to skip class and watch it later.”

Regardless, Lam states that this transitionary period helped him adapt and conquer challenges he had never faced before. “Sometimes, we get so involved with what we are trying to do that we forget why we wanted to do it in the first place,” he reflects when asked what his advice is for aspiring students. “If you find your interests lie somewhere, then try to explore them. Undergrad is all about exploration. It’s fun times, but it can also be scary. Just know that things will be okay.”

Shazreh Salam always struggled with what she wanted to pursue in her undergraduate journey and prospective career. This was especially true in her second year when she had to pick her program of study. “None of the courses I took in my first year gave a clear insight into what I wanted to pursue,” she recalls. That was until she took the course BIO375: Environmental Microbiology. “Upon learning the material, everything that I wanted to study clicked for me.”

In order to proceed with her studies, Salam found Biology and Chemistry were the best fit. Filled with a lot of obstacles, her favourite memories on campus are those she spent with friends. After failing an organic chemistry exam during the summer, she and her friends “drove to Domino’s and Krispy Kreme,” shares Salam. “We then drove down to Jack Darling Park to drown our exam sorrows in all the junk food we bought.”

Salam prefers classes in-person, as they establish better connections with professors and classmates. She reminisces on the time spent in the library, immersing herself in an environment where focus and studying came hand-in-hand. When classes were online, she struggled with attending lectures as she knew they’d be recorded. “Another big issue was focusing,” she adds. “Especially with my entire family working or studying from home.”

A road trip across Canada is in the books for Salam this summer, followed by a master’s in either Biology or Environmental Science in the fall of 2022. “I am going to take a little break and visit the East and West coasts to see the sights,” she says.

When asked what advice she would give to aspiring students, Salam stresses that UTM’s Degree Explorer is a student’s best friend when picking programs. She also warns students that procrastination is the worst enemy. “Whether it’s for applications or assignments, do not procrastinate and keep a daily or weekly planner to keep track of everything you must complete,” she concludes. “But honestly, just remember to have fun!”

The Medium congratulates the Class of ’22 for all their hard work and perseverance. May the following years in your careers bring fruition, satisfaction, and success! 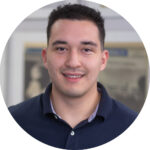