If 2022 was a fragrance, it would have notes of 2021, with hints of 2020 that smack you right in the face every now and then. With its threats of another pandemic looming over us like 2020, a war being waged, and the loss of many influential figures, 2022 was a year of events and memories that will make history. So, The Medium has recapped some of the most memorable and significant moments that 2022 had to offer.

All hyped up to start in-person courses and ready to accomplish our new year’s resolutions, January hit like a wave of disappointment. With the new Omicron variant, Covid-19 cases were rising, which forced U of T to keep its classes online until February 7, 2022. Meanwhile, with the introduction of vaccine mandates, international students were struggling to book their flights and find appropriate lodging in time for the start of classes.

On January 31, 2022, the Ministry of Education announced its Anti-Sex Trafficking School Board Protocol. The plan sought to develop protocols to efficiently prevent, identify, and intervene where appropriate, in part by creating a safer environment in schools through educating staff.

On February 24, 2022, the Russo-Ukrainian war escalated, with Russia invading the Ukraine, resulting in over 400 casualties within the days following the invasion. With that came one of the largest refugee crises since World War II. Shortly after, Canada, along with many other countries, imposed economic sanctions on Russia, including the prohibition of oil imports and Russian Central Bank transactions.

From celebrity drama and historic athletic accomplishments to a hope for a better future for Indigenous Peoples, March and April of 2022 brought us a whirlwind of events.

March 2022 met us with a slap—literally. After Chris Rock’s crude joke about Jada Pinkett Smith, Will Smith made headlines as he smacked Rock at the 94th Oscar Academy Awards. Leaving viewers awestruck, the slap swamped nearly every news platform, and debates about cancelling Smith filled social media feeds. Later in April, Smith resigned from the Academy.

Outside of Hollywood, March 2022 marked a monumental moment for Canadian Alpine Skier Molly Jepsen. Coming home with a gold medal in women’s downhill skiing from the 2022 Beijing Paralympics, Jepsen made history as Canada’s first Paralympic gold medalist. Born with missing fingers on her left hand, 22-year-old Jepsen has already achieved a total of five Paralympic medals in her career.

April 2022 came with a reminder that Canada’s Indigenous communities are continually in need of clean drinking water. In April, Prime Minister Justin Trudeau stated that $214 million will be invested by the federal government to construct a better water system in Iqaluit, Nunavut. Such efforts are crucial to heal the Indigenous water crisis across Canada. April reminded us that more education and funding for clean drinking water in Indigenous communities is key to a future of reconciliation.

May 2022 saw new fears arise regarding the possibility of a new pandemic, as Canada saw its first two cases of monkeypox confirmed in the province of Quebec. By May 25, the Public Health Agency of Canada released a statement confirming 16 total cases within the country.

Friday, June 24th marked the day the United States decided to write another chapter in Margaret Atwood’s The Handmaid’s Tale series, as the supreme court overturned Roe vs. Wade, the “landmark precedent” that supported abortion as a “constitutional right.” This raised great fears regarding the ability for women in the United States to access equitable and safe reproductive healthcare.

July 2022 welcomed us with hopefulness. UTM announced that mask mandates were to be lifted on July 1, paving a path to what we thought would be the end of public health scares for good. Unfortunately, that hope didn’t last for too long. On July 23, the World Health Organization declared monkeypox as a public health emergency.

Caribana also made its return for the first time in two years. For many, this meant not only a chance to socialize and celebrate, but to celebrate diversity, culture, and unity.

But July and August weren’t all hope and fun. Moments of life-altering horror plagued the lives of many too. Pakistan faced fatal flooding, which took the lives of thousands of innocent people, and displaced thousands more. And that wasn’t all the unrest that was amongst us. Wildfires, fatal heatwaves, and much more was among the world.

Amongst this all, The Medium began its 2022-2023 publishing year. And with this, August brought about hopes, dreams, goals, and of course, new stories.

September and October
Fall 2022 was the first fall semester since the beginning of the pandemic that students were permitted to attend campus without a mask. As students returned to classes unmasked and without social distancing, many voiced concerns in early September regarding public health safety being compromised when measures were relaxed.

Early in September, Queen Elizabeth II, monarch of the Commonwealth, passed away at the age of 96, marking the end of her 70-year long reign. Her funeral service took place on September 19, 2022, at the Westminster Abbey. She was buried that evening at the King George VI Memorial Chapel within St George’s Chapel, Windsor Castle. After mourning the loss of the Queen, the Commonwealth welcomed His Majesty, King Charles III, as the new monarch.

Additionally, tragedy struck in other corners of the world, and on September 16, 2022, the spotlight was placed on Iran. Mahsa (Zhina) Amini died while in police custody that day in Tehran, Iran. Her death sparked widespread protests in the country and across the world, calling for respect of women rights and abolishment of theocracy—rule by members of the clergy and religious laws.

On a lighter note, the return of in-person celebrations for Halloween 2022 sparked joy within many Canadians. During October, sexy nurse costumes, large-scale Halloween festive displays, and hanged mannequins made their way into celebrations, spurring a wide array of responses—from criticism for misrepresentation and poor taste to excitement for new experiences.

For many, November and December of 2022 consisted of streaming the World Cup during exam season, praying for France’s downfall, and wondering why Chris Evans was named People magazine’s Sexiest Man Alive when Jason Momoa and Henry Cavill walk this earth. But those weren’t the only notable events of the final months of the year.

In serious news, on November 4, over 50,000 Ontario education workers went on strike to fight for wage increases. The Ontario government’s more recent offer is of a $1-per-hour raise for education workers each year—an approximately 3.59 per cent yearly raise.

While teachers were protesting for better pay, their students and our peers were preparing for war on the TicketMaster website, determined to make their Swiftie dreams a reality. On November 15, 2022, Ticketmaster sold more than two million tickets for Taylor Swift’s The Eras tour. As fans and stans waited for hours in line, missed their midterms, and hot-spotted their computers while in transit, the American ticket sale and distribution company made big bank selling the most tickets in a single day.

Lionel Messi appeared at the World Cup for a record 26th time in his career, taking his team—Argentina—to victory. He also overtook legendary player Pelé with most direct goal contributions at the World Cup. Pelé, an ex-Brazilian soccer star passed away at the age of 82 on December 29, 2022, after a battle with colon cancer. On the same day, Dame Vivienne Westwood—an iconic and eclectic British fashion designer—passed away at the age of 81.

With such a dark twist on the overly-long year, 2023 brings new beginnings and an opportunity to reflect, binge watch Kaleidoscope before the school year starts, and begin the countdown to summer.

The team at The Medium would like to wish you all a 2023 filled with health, wealth, and hopefully, no more pandemics.

Arts & Entertainment Editor (Volume 49) | arts@themedium.ca — Julia graduated in 2022 with a major in English, and a Professional Writing and Communications and Drama double minor. She previously worked with The Medium as Theatre Erindale Correspondent for Volume 48. As the A&E Editor this year, Julia cannot wait to explore the wondrous world of arts and spark creative conversations amongst student writers. If she’s not writing, working, or spending too much money on overpriced iced coffees, you can find Julia singing tunes with her guitar, bingeing Netflix shows, or going on nature walks with her doggo Benji. You can connect with Julia on LinkedIn or Instagram. 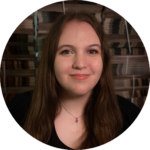 Opinion Editor (Volume 49) | opinion@themedium.ca — Kareena is a third-year student completing a double-major in Criminology and Socio-Legal Studies and Philosophy, and minoring in Forensic Science. She has previously served as the Associate Opinion Editor for Volume 48. Through her involvement and contributions with The Medium, Kareena hopes to foster a safe and trusted space, while encouraging others to let their voices and stories be heard. When Kareena is not writing or studying, you can find her watching true crime mysteries or cooking.

News Editor (Volume 49) | news@themedium.ca — Larry is a third-year student specializing in accounting. He finds writing to be an outstanding medium to spread messages, thus being a phenomenal way to express oneself and to have one’s voice heard. Through his contributions to The Medium , Larry hopes that everyone can witness how enjoyable and invigorating writing can be, such that they too may be inspired to write out their stories. When he’s not studying or writing, Larry will probably be learning Japanese or listening to music, all the while contemplating what life’s next story would be.